The second Air Law part deals with the aviation administration in Europe and the basic rules for operating unmanned aircraft.

This chapter discusses the following topics:

The European Aviation Safety Agency (EASA) is an agency of the European Union whose main aim is the creation of uniform European standards. It is also referred to as the “European Aviation Authority”; however, this is formally incorrect. It currently has 31 member states (excluding the UK, which is still shown on the map below). 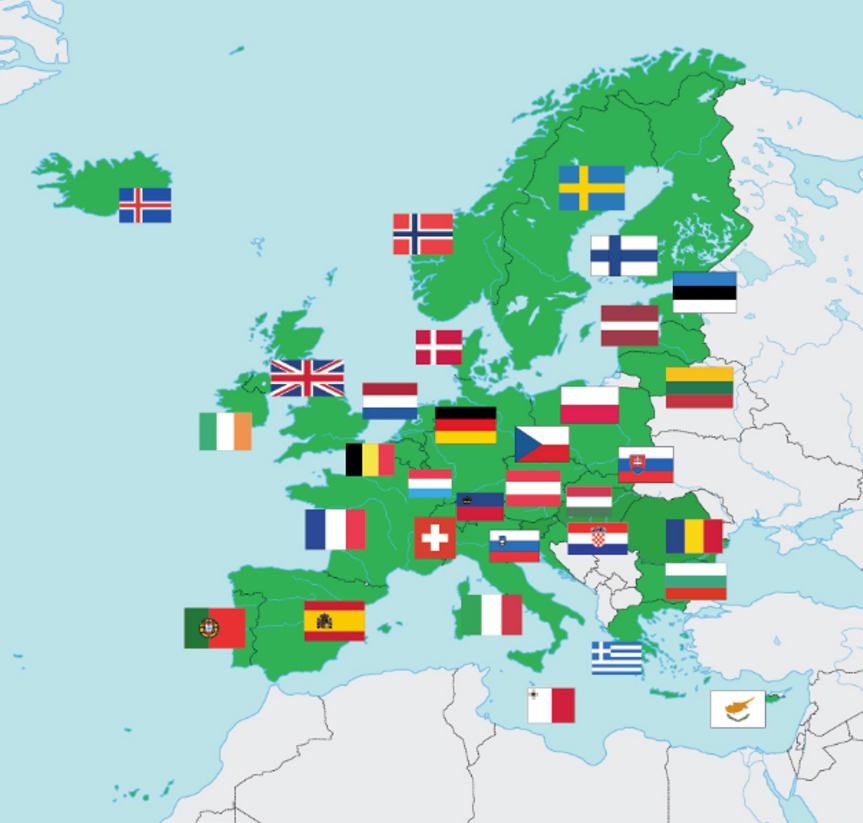 The EASA draft laws are published for discussion by national authorities and representatives from the aviation industry. Changes can be proposed at this stage before the EASA responds to any comments and adapts the draft if necessary.

At the end of this process, the approved laws are adopted by the EU Council of Ministers and the EU Parliament. These then automatically become legal EU regulations in all EU member states. Deviations are not permissible thereafter. Only minimal alterations to the regulations regarding UAS can be made by individual member states; for example, adapting the airspace to regional geographic conditions and designating the competent authorities.

Some countries outside the EU (e.g., Switzerland, Norway and Iceland) have also introduced the EASA aviation standards. In these countries, the EASA regulations must be converted into national law in order to become legal.

To explain and facilitate the application of the regulations, the EASA published the “Acceptable Means of Compliance” (AMC) and “Guidance Material” (GM) guidelines. The AMC discusses possible variants for applying the regulations in accordance with the rules in practice. An example of AMC guidelines are curricula for licenses and ratings.

The administrative authority which supervises aviation activities within each member state is called the “competent authority” or “aviation authority”. These aviation authorities are institutions with specially trained personnel who are experienced in aviation, boast the necessary skills and knowledge, and who are responsible for manned and unmanned aviation, pilots, operators, maintenance facilities and manufacturers.

In Germany, the Luftfahrt Bundesamt (LBA) is responsible for the Federal Ministry of Transport and Digital Infrastructure (BMVI); in Austria, the organisation is Austro Control; and in Switzerland, the Federal Office for Civil Aviation is responsible.

In some countries (as is the case in Austria and Germany) there may also be other aviation authorities that share the responsibilities, either based on the type of aviation or for different geographical areas.

The following EU regulations are important for remote pilots:

The EASA Basic Regulation (EU) 2018/1139 contains the essential requirements for Euro­pean aviation. It stipulates, for example, that operators and remote pilots must know about all relevant regulations, unmanned aircraft must be designed in such a way that they do not endanger the general public, risks should be minimised, and remote pilots must be competent.

The UAS Implementing Regulation (EU) 2019/947 contains the rules and procedures for operation, including the various categories and sub-categories of UAS.

In addition to the EU regulations, EASA has published the “Acceptable Means of Compliance” and “Guidance Material” (see above). These help to explain and interpret the regulations and show how to proceed in accordance with them. Many of the terms used in the regulations are also described in more detail. It is definitely worth taking a look at these documents.

In principle, the national aviation law of individual member states is required in order to apply and tailor the requirements of the EU to the specific circumstances in that state. For example, EU regulation stipulates that geographical zones must be created in which the operation of UAS are either permitted or prohibited. Therefore, individual member-state regulations must specify areas for UAS air traffic.

The minimum age for remote pilots in the OPEN category is 16 years. Individual EU member states can reduce this age by up to 4 years for domestic flights. Therefore, different regulations may apply within the EU, ranging from 12 to 16 years. 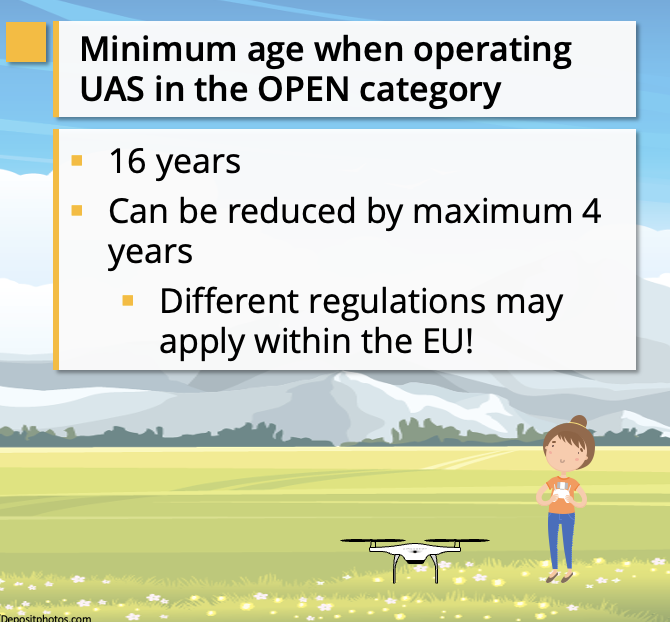 The minimum-age restrictions do not apply if:

Depending on the sub-category, different requirements apply for the remote pilot.

In order to acquire a basic knowledge of the most important regulations, hazards and operational requirements associated with the operation of a UAS, all remote pilots must first complete an online training course and pass an online test consisting of forty multiple-choice questions (both of which refer to the operation of unmanned aircraft in the OPEN category).

The only exception is the operation of C0-class UAS, for which no online course or theory test is required.

The online training provides knowledge in the following areas:

After passing the online exam, a certificate will be issued as proof of completion. This is valid for 5 years. Once 5 years have lapsed, both the course and exam will need to be repeated. 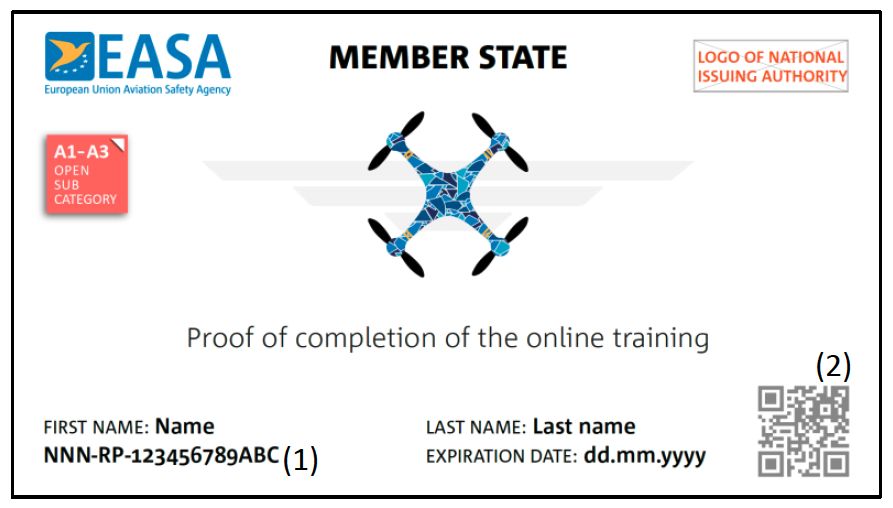 Self-practical training is required only if a C2-class unmanned aircraft is operated in sub-category A2 (meaning that a relatively large UAS is flown in the vicinity of the general public).

In this instance, there is a high risk of control errors: therefore, remote pilots in this class must first fully master the control of their unmanned aircraft and learn how to fly in empty, safe spaces before attempting flight in these conditions.

This is to be done alone, in an area where there is no risk to the general public, and at a distance of at least 150 m from residential, industrial, leisure or recreational areas. This corresponds to the operation guidelines in sub-category A3.

Before carrying out self-practical training, make sure that you:

On successful completion of the course, the remote pilot accepts all responsibility, declaring that they are now familiar with the UAS and can control it safely.

In addition to the online course, the online test and the practical self-training, remote pilots in sub-category A2 must pass a theoretical test on site under the supervision of the competent authority (or a commissioned organisation).

The theory test consists of thirty multiple-choice questions and covers the following topics:

After successfully passing this theory test, a remote pilot’s certificate of competency is issued, which allows for the operation of unmanned aircraft in sub-category A2. 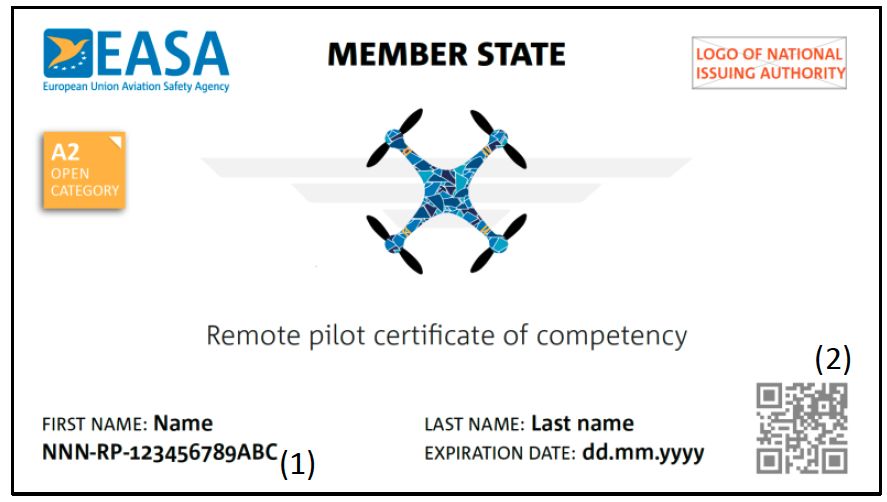 The registration of unmanned aircraft is not primarily used for flight safety, but rather to track the UAS and to protect the general public.

It is relatively easy to violate other people’s privacy with the help of an unmanned aircraft due to its ability to record personal data. It is, therefore, imperative to register the aircraft.

If you operate an unmanned aircraft that has at least one of the following characteristics, you must register as a UAS operator::

Only UAS which are subject to the EU Toy Directive are exempt from registration.

Registration is completed through the competent authority (as discussed above).

The last issue to be aware of is impact energy. This is the kinetic energy with which the unmanned aircraft hits the ground or other obstacles in the event of a crash. The higher the impact energy, the more likely it is for individuals to be injured or for objects to be damaged.

For example: if you lose control of a C0-class UAS flying at its maximum speed of 19 m/s, at a height of 25 m, and operating far below the maximum permitted altitude, it is likely to crash in a parabolic motion, picking up speed during the process. Mathematically, this could result in an impact energy of up to 110 joules, which is well above the limit of 80 joules.

Injuries are possible from an impact energy of just 79 joules – in the event of an impact with more energy (from greater heights or with a heavier UAS), injuries are significantly more severe or – in worst-case scenarios – can result in fatalities. 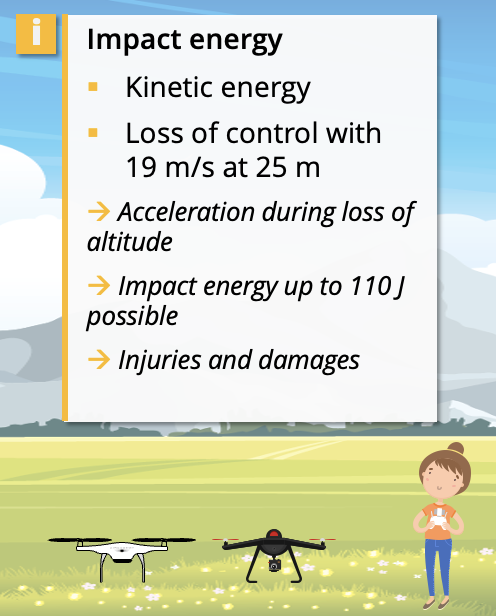