The second sub-chapter deals with the construction methods and limitations of unmanned aircraft.

Regardless of design variation, unmanned aircraft consist of the following components:

The propulsion system consists of an energy source (usually batteries or fuel), motors and a power distributor. The system also includes a speed controller and the propellers. With most UAS the energy required is provided by an electric motor; only a few UAS use an internal combustion engine.

The basis for an electric motor is permanent magnets and electromagnets in the form of coils which cause a rotational movement through a rapid change in the electric current.

The speed controller, also known as the ESC (Electronic Speed Controller), controls the speed at which the motor – and thus the propellers – turns; the flight electronics transmit the desired speed to the controller.

A propeller is nothing more than a wing that can generate lift when it rotates in the air. It converts the rotational movement of the motor into an upward movement of the aircraft; as the propeller turns, it pushes air down.

The on-board computer with autopilot is the “brain” of the UAS. This central unit records and processes the information from all sensors and control inputs and sends data to the speed controller.

The electronics (or firmware) are based on the installed software, which is regularly updated by the manufacturer. It is your duty as a remote pilot to install these updates.

Many manufacturers specify that a flight can only be carried out if the latest version of the software has been installed. After an update, you should always test all functions in a safe place during the flight! This also applies to ground station or control software.

The unmanned aircraft is controlled from the ground via the controller or ground station. Instructions are sent by radio transmission to the flight electronics of the UAS.

Telemetry is the radio link between the controller and the flight electronics of the UAS. Each of these elements is equipped with a transmitter and a receiver.

Accordingly, telemetry not only sends control signals to the UAS, but also sends information about the status of the UAS back to the ground: at what altitude/height is the UAS located? What is the temperature of the engine? What is the battery level? You can also get a preview of the on-board camera so that you can align the UAS optimally for picture or video.

In addition, a number of other elements such as navigation lights, control lights, a gimbal for the camera, automatic landing gear, etc., can belong to the UAS components. Depending on the equipment, various instruments and sensors are also included.

The payload is also another component and describes everything that is otherwise added to the mass of the aircraft.

The functional interaction of the various elements is crucial.

The remote pilot’s inputs into the remote control are transmitted via telemetry to the on-board computer of the UAS. This processes information from various sensors, for example:

Based on this information and with the help of pre-programmed flight parameters and algorithms, the computer calculates and sends data to the electronic speed controller. This gets its energy from the distributor which, in turn, is connected to the battery.

On the other hand, the speed controller controls the speed of the individual motors and thus also the movements of the unmanned aircraft. If the aircraft is equipped with special electronics, it can, for example, follow someone on the ground or fly a 360-degree loop.

In addition, certain payloads, such as a camera, can be controlled via telemetry – i.e., inputs from the remote control.

Every flight is subject to certain restrictions, some of which are general and others which depend on the location or situation.

Furthermore, it should be noted that lithium polymer (LiPo) batteries lose their potential capacity very quickly, so that the optimal flight time can only be achieved during the first few flights. As a rule of thumb, you should subtract at least 20% of the stated maximum flight time.

Most UAS have a maximum speed of 15 m/s, which limits their use to wind speeds of less than 10 m/s. If the wind gusts are higher than the maximum speed of the UAS, it may not be possible for the UAS to return home. Note that the wind speeds at a height of 100 meters can be much stronger than close to the ground!

Manufacturers sometimes state distances of, for example, 1 km with regard to the reception capabilities of the remote control. In practice, however, the UAS must remain within your visual line of sight (VLOS). Radio contact can also be impaired by signals from on-site mobile phone masts or towers.

That the weather has an influence on every flight should not be underestimated. A UAS flight is not recommended in rain, snow or hail; in addition to the physical impact on the UAS, these conditions can damage electronics and affect communications between the remote control and the UAS.

When the weather is both very cold and humid, the propellers can ice up, which will most likely lead to a crash.

In hot weather (> 35 °C) the motors can become very hot if they are not cooled sufficiently. Manned aircraft have temperature measurements on engines and corresponding warning routines.

Temperature also has a great influence on battery capacity. Capacity is most limited in cold weather: batteries should be stored in a warm place such as a pocket or in a warm car. This ensures that they are at a higher temperature at the start of the flight.

In addition to legal requirements, performance limitations or environmental restrictions, there are also restrictions on the equipment of unmanned aircraft.

A UAS should always be handled with the utmost care, especially during landing. Severe impacts can affect the on-board systems and the resulting damage is not always visible at first glance.

Fatigue of certain elements should also be taken into account. In these cases, damage is not caused by a specific event, but rather by several, smaller incidents that together cause a component to fail. For this reason, a thorough inspection before the first flight of the day is highly recommended.

Propeller damage often occurs during flight, from collision with other objects or if the UAS tips over during landing. A damaged propeller cannot rotate properly, causing vibrations which in turn affect the engines.

Propeller damage can quickly lead to a crash, which is why propellers should be replaced immediately if damaged. Afterwards, a test flight should be carried out in a risk-free environment.

Many engines have a service life of around 20,000 hours under theoretical conditions. However, practical conditions, such as the ingress of sand, dust and water reduce this in some cases considerably.

You can test if this is the case by carefully turning the propellers by hand. If you feel resistance, fine particles are likely to have lodged in the engine: the motors should be checked more closely in this case.

UAS are equipped with appropriate systems to prevent unmanned aircraft from flying into restricted, danger or prohibited areas. 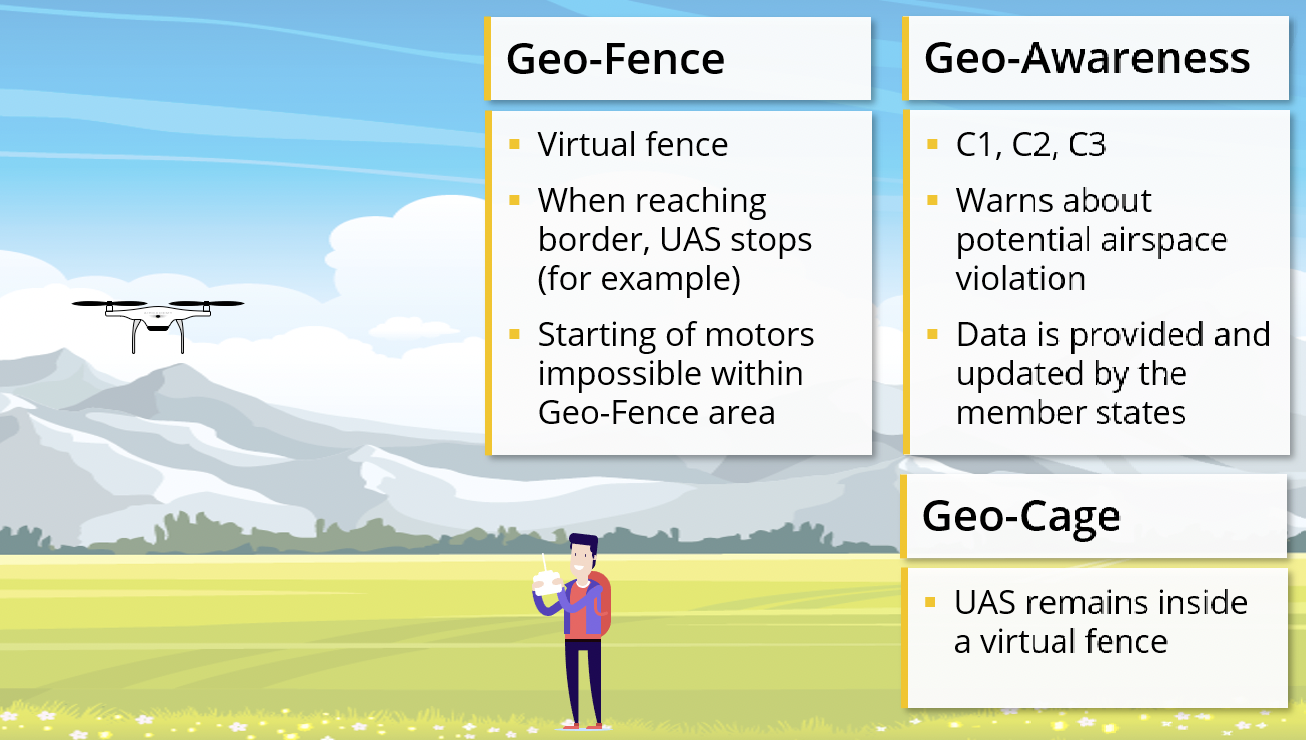 UAS of classes C1, C2 and C3 must be equipped with a Geo-Awareness system. This system warns the remote pilot of potential airspace violations so that they can take immediate action. The data for this is provided by EU member states and must always be kept up to date.

Many UAS are also equipped with an additional security function, the so-called “Geo-Fence” system (composed of the words “geographic” and “fence”). The “Geo-Fence” is a virtual fence, i.e., a border, that can be determined by the manufacturer or remote pilot using coordinates.

When reaching or overflying the set limit, a specified manoeuvre is triggered: for example, the UAS stops during flight. If the “Geo-Fence” is installed and the remote pilot tries to make the UAS take off within a restricted area, the UAS will not even start.

“Geo-Caging” stands for the opposite concept: the UAS starts and remains within a virtually fenced off area. The remote pilot can also define their own “Geo-Cage”; for example, by specifying a maximum height and distance from the starting position.

In the event of a loss of control, there is the advantage that the UAS would remain within the defined area, but only if the satellite navigation system is still working.

Most unmanned aircraft have one or more so-called “fail safe” modes. These are mostly automated safety manoeuvres to retrieve the UAS in the event of a problem.

This function is also called “Return to Home” or “RTH” for short. To use this procedure, the starting position of the UAS must be recorded and the current position must be known at the time of the failure.

The following RTH modes can be started:

After activating the RTH mode, the unmanned aircraft chooses the shortest route back to the take-off position. The RTH manoeuvre usually will not take into account if there is an obstacle between you and the UAS; therefore, collisions can occur. It could even be the very same obstacle that caused the radio interruption in the first place.

A collision with tall objects on the ground can be avoided as follows:

The RTH height must be set higher than that of obstacles in the area of operation. The UAS then first climbs to this altitude before returning to the take-off position.

The collision avoidance system must also be activated to prevent collisions with objects on the way back.

If your UAS does not have a collision avoidance system and you cannot set a safe height for the RTH function, you should not let the unmanned aircraft fly behind an obstacle that is directly between the UAS and the take-off position.