This sub-chapter concentrates on data connection and deals with various flight modes. The following topics are discussed:

In radio communication, information is transmitted through the air using electromagnetic radio waves. This principle is used in most everyday wireless communications, such as radio, mobile phones, television or WIFI – and also UAS control signals. 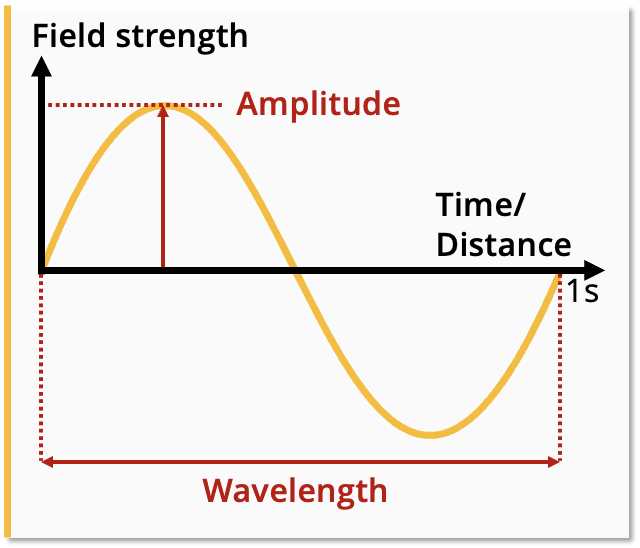 The radio wave can be thought of as an actual wave motion. The wavelength is the distance in the direction of propagation after which a complete oscillation (with positive and negative deflection) is repeated.

The amplitude is the maximum deflection of the oscillation based on the baseline (zero).

The frequency describes the number of oscillations per second. Frequency is measured in hertz (Hz), which corresponds exactly to one oscillation per second.

Very high frequencies are common in radio technology; for example, a standard WIFI frequency is 2.4 GHz, which corresponds to 2,400,000,000 oscillations, or waves, per second. This high frequency is necessary in order to be able to pass on the large amount of information.

The relationship between frequency and wavelength is inversely proportional.

In order to extract information from a wave, the recipient must know how the wave is altered. This is done by changing wave properties: known as modulation.

Radio waves propagate as so-called “direct waves” (also called quasi-optical waves) from a frequency of around 30 Hz. This means that they propagate in a straight line from the transmitter.

Obstacles which interrupt the radio wave are the greatest interference factor and reception behind these obstacles is thus impossible. Therefore, always make sure that there is a direct line of sight between the transmitter and receiver, i.e., the remote control and the UAS. 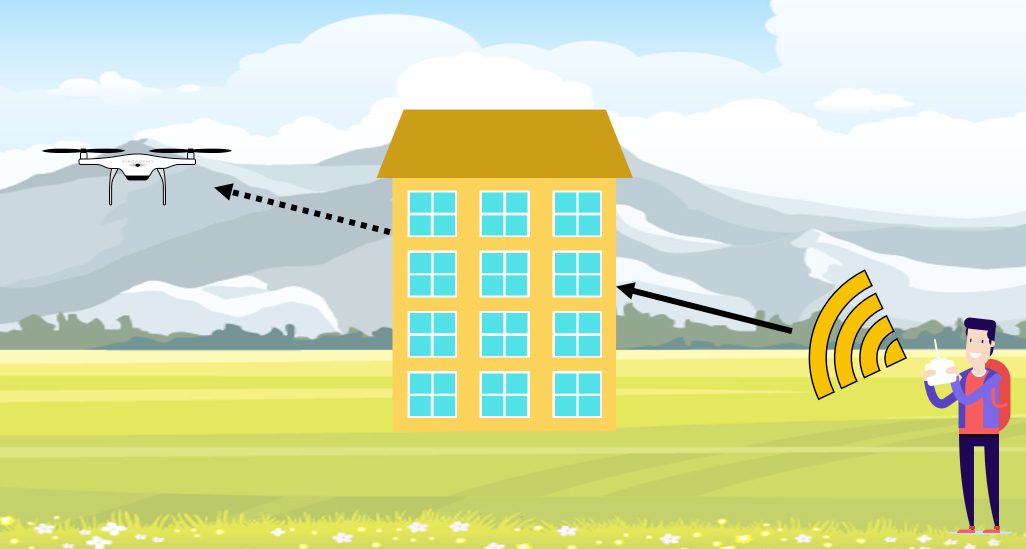 The radio communication signals which control the UAS and receive feedback from the payload (e.g., a camera) usually use a WIFI frequency of 2.4 GHz and 5.8 GHz.

Usually, the signals are sent with a combination of amplitude and frequency modulation. There are clear advantages to using Wi-Fi in unmanned aircraft. However, Wi-Fi uses “Ultra High Frequency”, which limits the range to around 600 m. 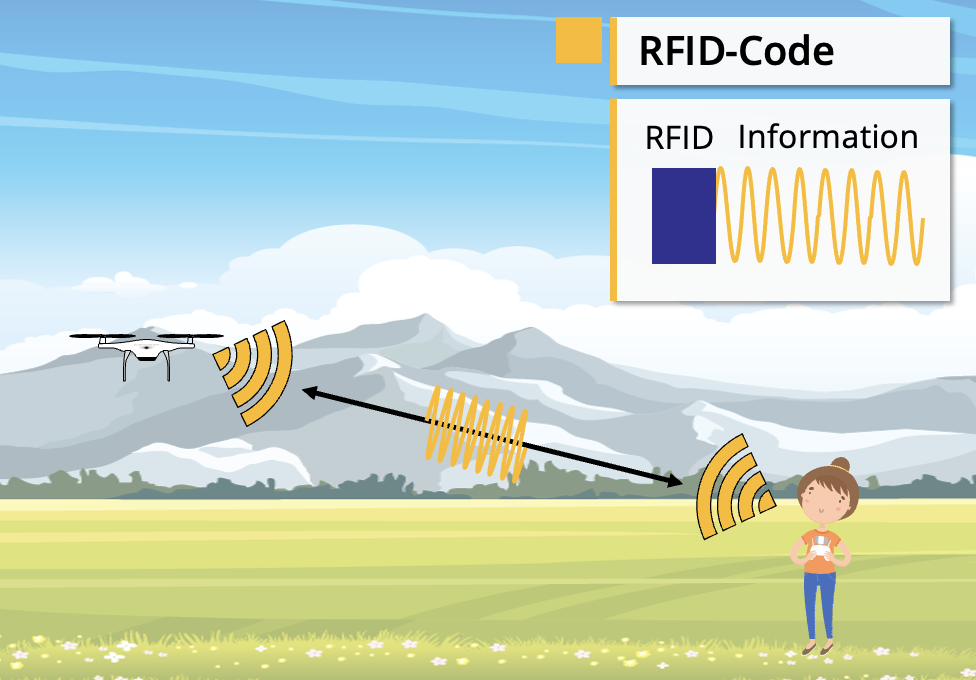 To prevent your UAS from reacting inadvertently to someone else’s controller, the transmitter and receiver are linked using an identification code: the RFID code (Radio Frequency IDentification). When a signal is sent, an RFID prefix is added to it; coupling with this prefix enables the radio signal to be clearly identified.

Just like cars, unmanned aircraft have been standardised in their controls so that remote pilots can control a new UAS in exactly the same way as a previous one. UAS are usually controlled via two joysticks, which can be operated in different modes.

Modes 1 and 2 are by far the most common, with mode 2 being the industry standard for commercial UAS operators and mode 1 used occasionally by amateur remote pilots.

Switching between mode 1 and mode 2 is demanding and should only be performed by experienced remote pilots. It is therefore advisable to focus on one mode, preferably mode 2, as this corresponds to the factory settings of many UAS. Modes 3 and 4, are rarely used in the OPEN category.

The UAS can be controlled via the following four channels:

There are four main flight modes in which the unmanned aircraft can be flown:

In manual flight mode, the UAS remains straight and directionally stable. However, the position can be influenced on one hand by wind – which can cause a drift – and on the other hand by gravity, which pulls the UAS downwards.

Mastering manual steering in all directions, even in strong wind conditions, is important and should be practised regularly; if sensors which are required in a stabilised or pre-programmed mode fail, this skill is required in order to be able to safely end the flight.

In altitude mode, the UAS maintains its current altitude unless instructed otherwise by the remote pilot. Due to drift caused by wind, the position cannot be precisely maintained.

The GNSS (GPS) mode, on the other hand, is a fully stabilised mode: the UAS maintains its position and altitude, unless instructed otherwise. The position can be held by autonomously monitoring the GNSS position.

It should be noted that this mode only works if a sufficient number of satellites are available and if these are not shielded by obstacles. Otherwise, only the altitude mode can be used.

In the pre-programmed mode, the UAS follows a route with the help of given waypoints or coordinates. This mode is used, for example, for a topographic survey: the UAS must record images at precisely predefined positions so that they overlap with a fixed percentage. Such accuracy cannot usually be attained through manual flight. Another example would be flying in an optimal circle around a tower while keeping the camera pointed at the tower.

A fully autonomous mode would mean that the remote pilot cannot intervene, but rather the UAS flies autonomously and makes decisions. This is currently not allowed; remote pilots must be able to intervene at any time.