At the beginning of the “UAS General Know­ledge” chapter, we will outline the principles of flight and examine how unmanned aircraft can take off at all.

At first glance, air appears almost like “nothing” – if something has disappeared, it is said to have “dissolved into thin air”. In fact, air is much more than nothing, and it is only the characteristics of air flowing around a body that makes it possible for an aircraft to fly. In fact, it is aerodynamic force that lifts the UAS and lets it hover in the air.

In addition to these forces, we will take a look at the directions of movement of the UAS and how the forces are used for control.

A wing and a rotor blade have a similar cross-section: in principle, a rotor blade is a small wing. The cross section of a wing profile usually has a round front edge and tapers to the rear.

On this aerofoil – or rotor blade – the airflow creates four forces that act in four different directions:

In a steady and straight flight, all forces acting on the wing are in equilibrium, so that no resulting force remains. No resulting force means that the aircraft or rotor blade does not become faster or slower, nor does it climb or descend.

If this balance is intentionally or unintentionally disturbed, the UAS climbs or descends, becomes faster or slower.

The aim of the typical wing shape is to maintain an optimal balance between lift and drag and to enable lift even at different speeds. This can be achieved by “tilting” a surface slightly towards the airflow, which creates a pressure difference between the top and bottom of the aerofoil.

This angle between the wing chord and the airflow direction is called the angle of attack.

This effect can also be experienced when driving a car by holding your hand flat out of the window so that the thumb is pointing in the direction of travel, meaning that the airflow hits the edge of the hand directly. The airflow on the upper and lower side of the hand is similar: no lift is generated.

However, if the hand is tilted in a way that the thumb is pointing upwards, you can immediately feel how the hand is pulled up. The angle of attack has been increased, which leads to different airflows around the upper and lower side of the hand: lift is created. 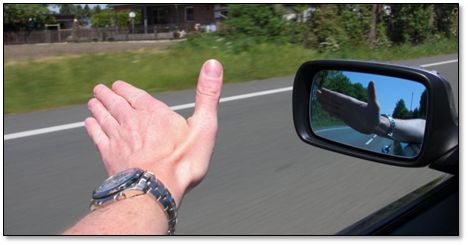 By increasing the angle of attack of a wing, the air above the wing is accelerated, causing the pressure to drop. Below the wing, the air “presses” a little against the surface, which creates a higher pressure underneath. The result is a force on the wing, which “pulls” it upwards – this is lift. 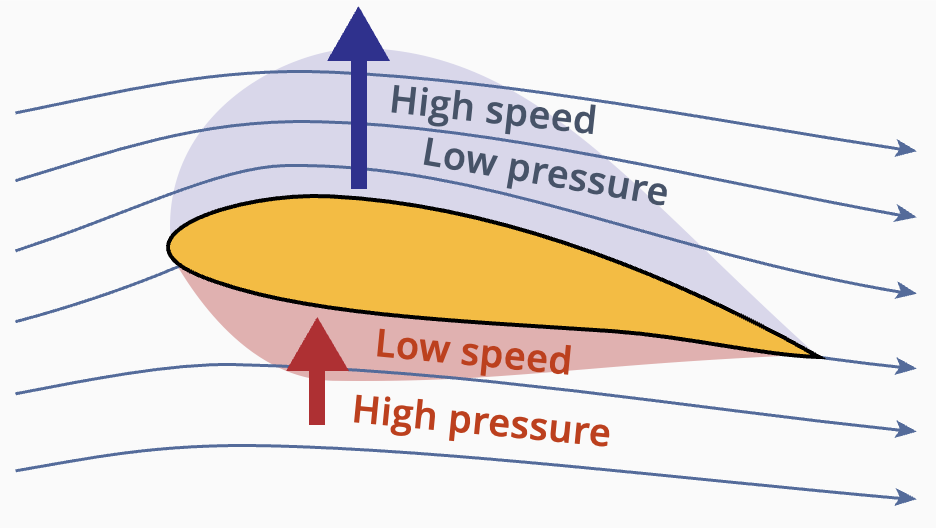 In addition to the angle of attack, the speed of the airflow plays a role in the strength of the lift: the faster the wing moves through the air, the higher the lift. In the case of a UAS with propellers, the lift increases accordingly with a higher rotation speed of propellers.

Aircraft can move around the following three axes in all three spatial directions:

All axes are perpendicular to each other. In the case of multirotor UAS, which usually have a symmetrical structure, the front direction is often marked so that the directions of movement can be clearly identified.

The movements of multirotor UAS are implemented by varying the propeller speed. Elevator, rudder and ailerons are used by UAS with wings.

A multirotor UAS or multicopter has three directions of movement:

To take-off with a UAS, the total upward force generated by all propellers must be stronger than the gravitational force. This is achieved by rotating the propellers faster.

Once the desired flight altitude has been reached, the speed of the propellers is reduced until there is a balance between lift and weight. 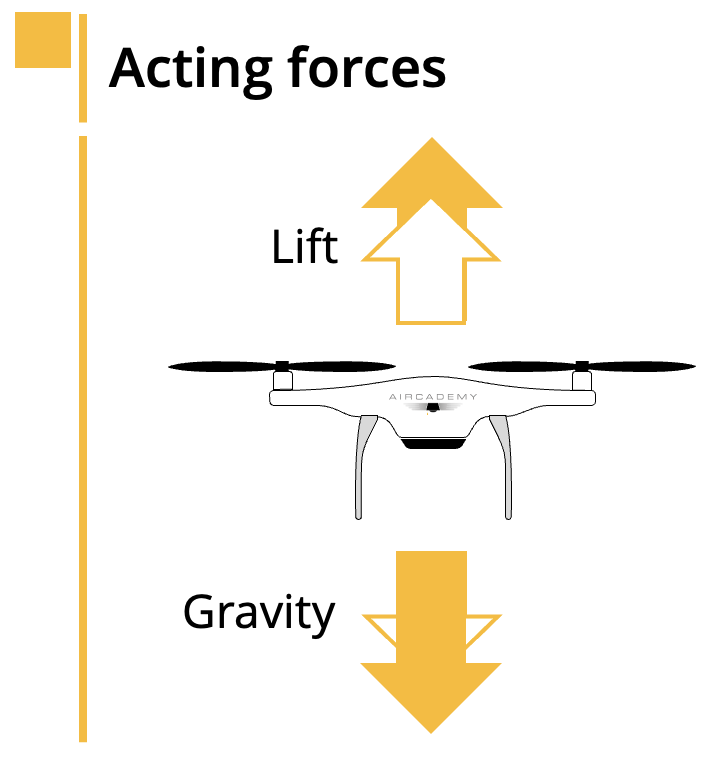 In order to descend with the UAS, the lift generated by the propellers must be slightly less than the gravitational pull.

To turn around its axis, the total force of one pair of opposing propellers must be greater than that of the other pair.

However, if only the force on propellers 1 and 4 is increased, the UAS would climb due to the increased lift. To prevent this, the speed of propellers 2 and 3 must be reduced at the same time. 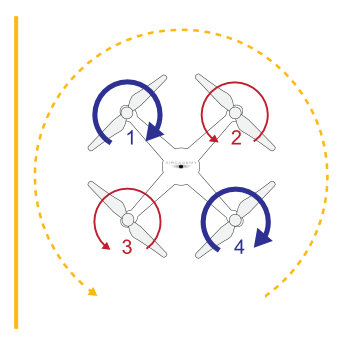 Whether a UAS moves forward, backward or sideways is often a matter of opinion when flying an unmanned aircraft, since each side can be in front or at the back. As a rule, the remote pilot sets the perspective.